The [Complete] Guide To Gun Belts 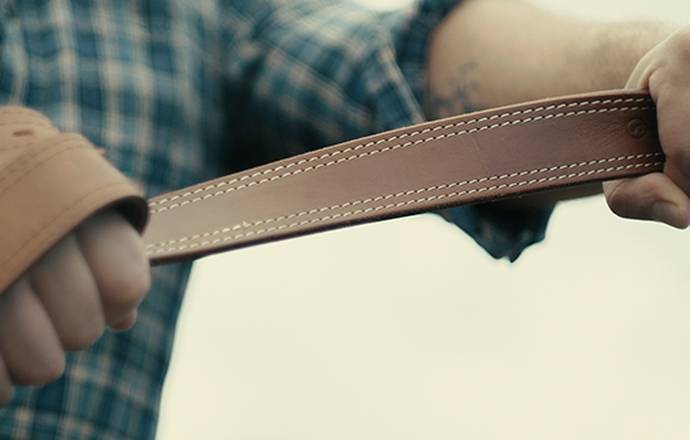 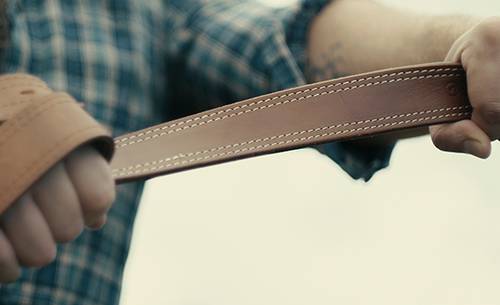 If you never want to worry about your safety when carrying, you definitely need a solid gun holster. However, if you want to get the most out of your holster's potential, you should attach your holster to an even more solid gun belt. And that's exactly why I'm here today.

In this guide, I'll not only show you what some of the best gun belts are, but I'll also try to explain why you need one. We'll also have a look at materials belts can be made of and the most important properties any decent gun belt should boast.

I bet you clicked on this article because you want to get a new gun belt, right? That's why I'll start with a brief overview of 6 best gun belts you should consider buying before this year ends. I know 6 is still quite a big number, but every single of the belts below offers something else and can be used for different purposes, and I'm sure you'll be able to choose 1 clear winner.

Let's kick it of with the most elegant gun belt on our list that's also a great deal. This belt made of genuine Italian leather now comes at incredible 30% OFF, which means you can now get it for mere $35 (price accurate at the time of writing). This belt for gun holsters has a very smooth surface and a high quality brass buckle. The belt is 1.5 inches wide and available up to XL size (43.4'' - 47.2''). 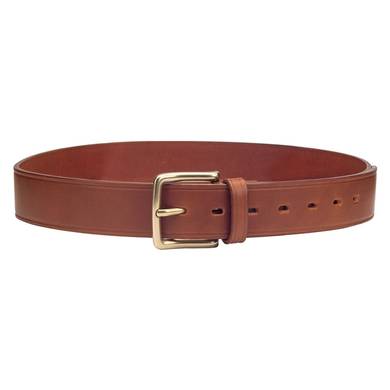 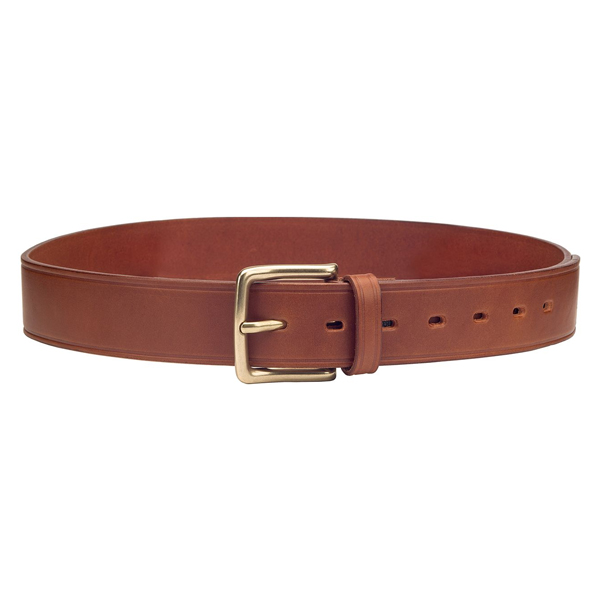 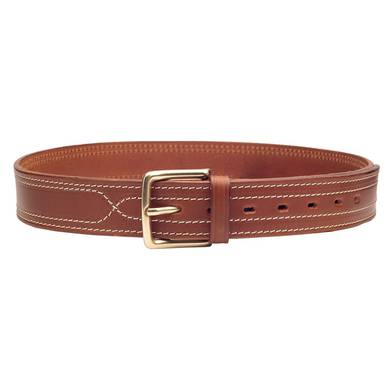 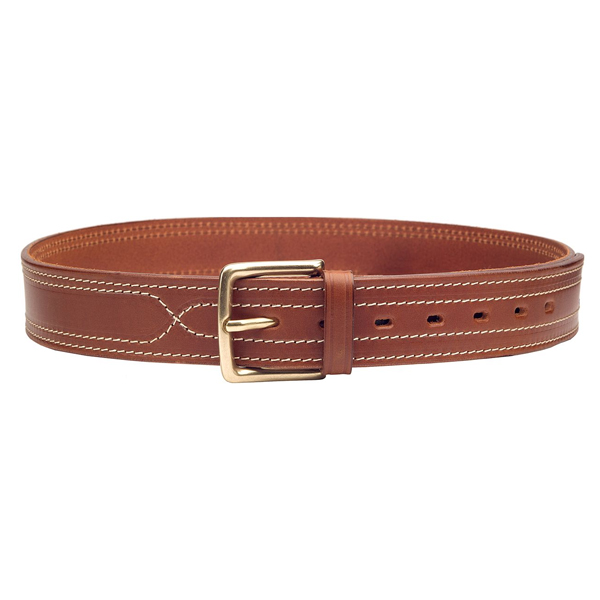 Another leather gun belt on our offer is similar in appearance to the first one, however, it features a completely different type of stitching. The lateral stitching also results in higher durability and longevity. The solid brass buckle adds to the elegant look of this belt. The Italian leather this belt is made of comes in two colors - mahogany and black. The belt is 1.5'' wide and available up to XL size (43.4'' - 47.2'').

This belt might look equally elegant as the first two, but the leather it's made of is a bit thicker, which makes this leather belt much sturdier. It comes with a silver-colored buckle, which makes it a great fit with pretty much any type of clothing. The belt is 1.5 inches wide and available for up to XXXL size (51.5'' - 55''). It can also be made of both black and mahogany Italian leather. 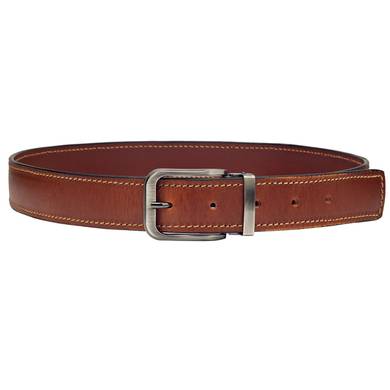 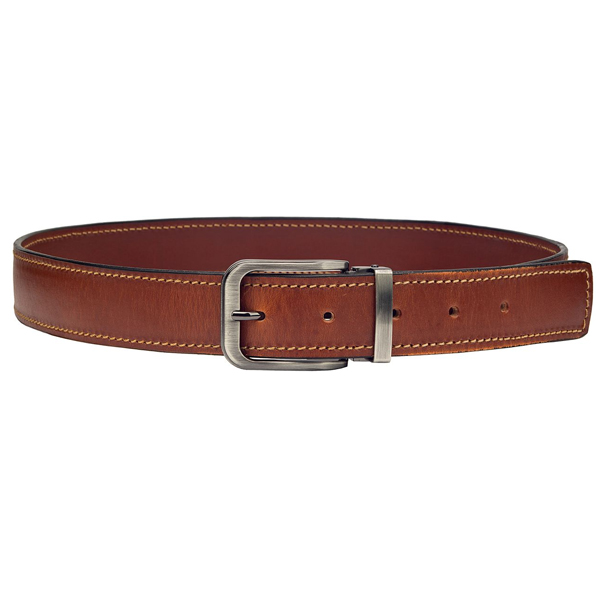 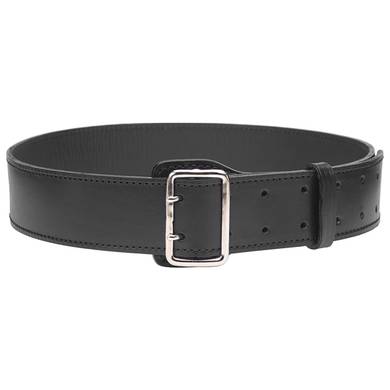 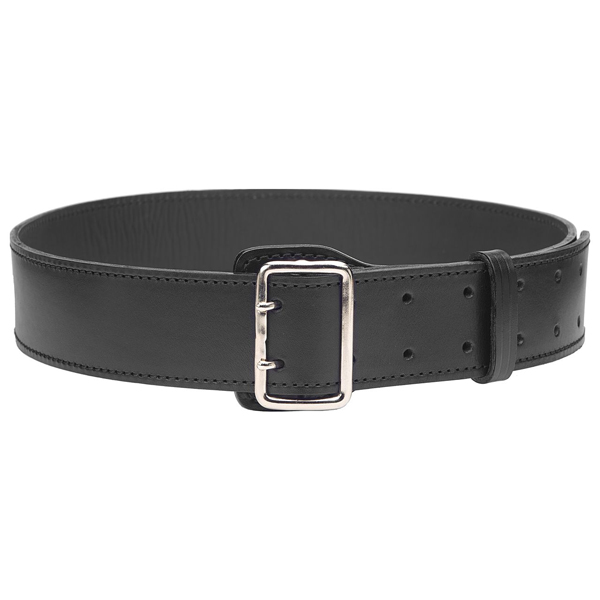 This leather gun belt is designed specifically for on-duty professionals. It's extremely sturdy and durable and it's also wider than most other belts on the list. The belt's 2 inches wide, which needs to be taken into account when selecting the holster you want to use it with. This leather duty belt is a perfect fit for duty holsters or paddle holsters. The belt is available in black color and for anyone up to XXL size (47.3'' - 51.2'').

This nylon gun belt is an ideal choice for IPSC shooters. The belt is designed to fulfill the needs of any dynamic competition shooter. Just like other IPSC belts, this one is also a combination of 2 belts in one. The inner belt is attached in a traditional way and the inside part of the outer belt is surfaced with a Velcro that needs to be attached to the inner belt. The belt is available in black color and up to XXL size (47.3'' - 51.2''). 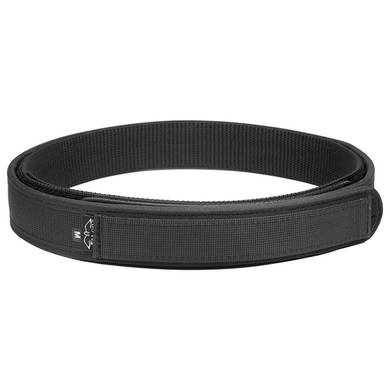 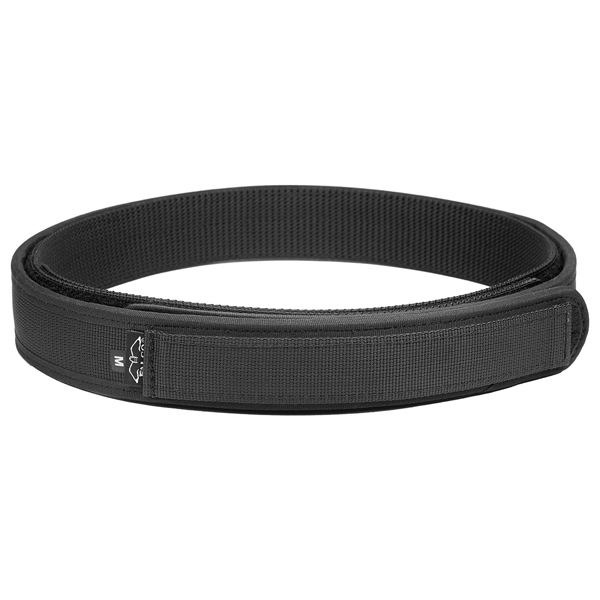 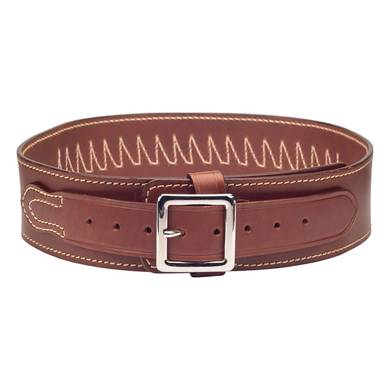 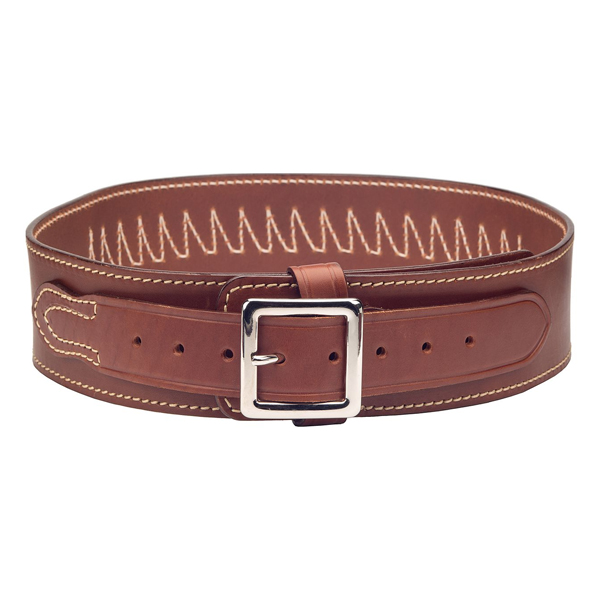 If you love western movies or carry an Old West revolver in a western holster, you should definitely go for this Old West gun belt. Not only does it look spectacular, it also boasts high utility, as it allows you to carry multiple spare cartridges. This western leather belt is quite wide and it's available in mahogany color and up to XL size (43.4'' - 47.2'').

why do you need a [Real] Gun Belt?

The main reason behing why to get a solid gun belt is that you always want both your gun and holster perfectly balanced. Gun belts are specially designed to support the weight of the gun that you are carrying.

It's true that smaller carry guns such as the SIG P365 or Springfield Hellcat can be carried perfectly safe even in a clip holster attached directly to your pants. However, if your everyday gun is something as big as a 1911 or Beretta 92FS, just a regular belt simply won't do and your gun will inevitably start sagging after some time of carrying.

Here are some of the most crucial benefits a real gun belt offers:

I've already shown you some of the best gun belts in the market, so let's now focus on educating ourselves a bit. Based on material, construction, design and functionality, gun belts can be divided into the following types:

Even though leather gun belts have been in existence for the longest, they haven't faded in popularity at all. They are usually made of thick cowhide, however, it's not uncommon these days to come across ones made of horsehide.

When it comes to leather gun belts, there's one simple rule - the thicker the leather, the stronger the belt. Regular leather belts are roughly 1 to 1.25 inches wide, but as your gun and holster requires something stronger, most leather gun belts are around 1.5'' wide when and around 0.2'' thick.

Gun belts made of leather are preferred among most shooters mainly because they very comfortable to wear, look classy, and can easily be combined with your everyday clothes and go well with most of gun holsters. Would you like a gun belt that does exactly that? Then you can get it here.

Nylon belts can be considered a type of military belts. Thanks to their bigger size (usually around 2 inches in width), they are ideal for people who carry belt slide or paddle clipped holsters. Belts made of nylon are also quite common among competition shooters.

One of their biggest benefits is that they are much lighter than leather belts, which makes them a viable option for everyday carry as well. On the downside, they don't look as classy, but that's something that can be easily overlooked if functionality is the main thing you're after.

These belts are a great match for any nylon holster or even those made of kydex, just make sure you get a holster that comes with attachment points as wide as your nylon gun belt.

These belts are composed of multiple layers of woven or synthetic materials (mostly nylon and cordura). A great example for this type of belt would be your typical rigger’s belt. Just like most leather gun belts, synthetic belts are also around 1.5'' to 2'' wide and roughly 0.2 inches thick.

Reinforced gun belts are sought after by people who're not only looking for a belt that supports the weight of their holster and gun, but also other EDC tools and accessories they carry around the waistline.

Due to their functionality and utility, these belts are commonly used by Law Enforcement and other on-duty professionals. And in case you're looking for a duty gun belt that offers exactly that, I suggest you give this one a look.

Although I consider leather belts the best and classiest option, I have to admit there's something they're lacking when comapred to other materials - they start showing signs of wear quite quickly when used daily. And that's even more true when it comes to gun belts as they carry extra load - gun and holsters.

And that's exactly why reinforced leather gun belts came into being. These belts combine both leather and woven elements to bring two layers of leather into ideal alignment. Thanks to the way these belts are made, you don’t have to worry about the weight of your pistol or revolver as much as you have to when it comes to regular leather gun belts. A great example of a reinforcer leather gun belt is this one, featuring basket weave pattern.

These gun belt are extremely durable and strong mainly because of their incorporation of Kydex or steel, which helps leather to bend and regain its original form afterwards. These belts are once again mostly chosen by on-duty professionals.

These belts are usually around 0.25 inches thick and around 1.5 - 2 inches wide. This makes them both stronger and they'll also last longer. The downside of leather hybrid gun belts is that these enhancements can cause the belt to be too rigid.

Before buying a hybrid gun belt, it's best to look for experience of those who've already got one. Also, be aware of cheap belts, the quality of which is questionable. But if you buy the right one, you can be  it will last you a lifetime.

Alright, we've been through the best gun belts on the market. You've also just read about the main types of gun belts when it comes to material and construction. Let's now wrap this up with the main features of gun belts and the important things to keep in mind when buying a new gun belt.

Don't judge a book by its cover. You all know what that means, right? Well, to put simply, when you're selecting a new gun holster, don't base your decision solely on its look. The main thing you should have in mind is the belt's durability and functionality.

The ability to support the hoslter and the gun is a feature based on the construction of the belt. If you carry something as small as the Glock 43 or perhaps Springfield XD-s, you don't need a super thick belt. However, if you rock a Ruger Redhawk, you simply need a proper gun belt. Also, a real gun belt will let you comfortably carry magazine or speed loader pouches, which is a cherry on the top.

However, I'm not saying that belts that look great can't work equally as good. If you pick a well-made leather gun belt, I'm sure you'll get a great package, offering both classy looks and great longevity. On top of that, such a belt will just be an excellent match for your leather holster.

If you need a belt for other than everyday carry purposes, I'd suggest looking for a gun belt that meets the occasion. Are you an on-duty professional? Then it's easy - get a duty gun belt. Do you take part in shooting competitions? Then consider getting an IPSC gun belt. And in case you're not sure what you might need your gun belt for, hit that button below and simply pick the one you like best, I'm sure you'll be nothing short of satisfied.

The [Ultimate] Guide To The Best 9mm Holsters