Taurus Public Defender VS S&W Governor - Which Revolver Is Better For Concealed Carry? 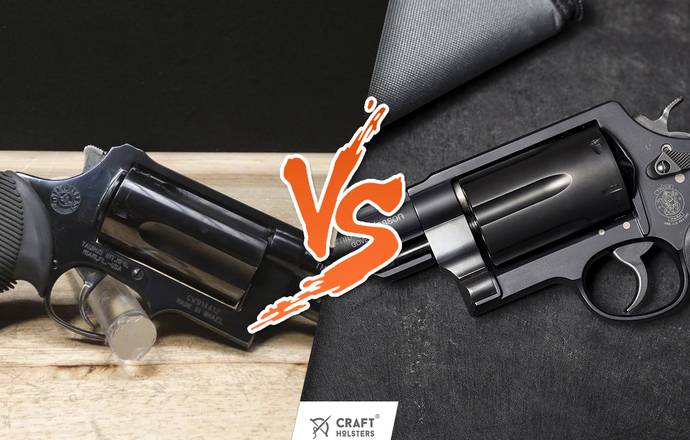 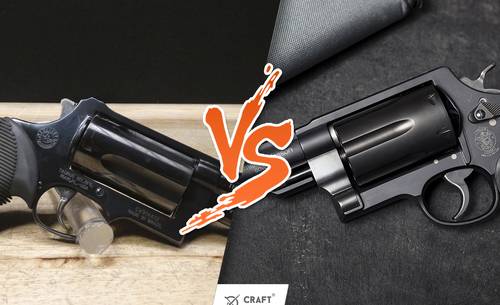 Across the past few years, it's been sub and micro-compact semi auto pistols ruling the concealed carry market. Great examples of the most popular carry guns are the SIG P365, Hellcat, G43, M&P Shield or Taurus G2c. And the reason why the already high popularity of these handguns is still growing is pretty understandable. All of these guns are quite inexpensive, reliable, and extremely convenient to carry. Moreover, there's so many ways how to upgrade any of these guns to the user's liking. And there's no problem getting a solid holster for any of these guns anymore.

However, when deciding which carry gun to go for next, you shouldn't forget about revolvers. Some of them might even be more ideal for self and home defense than semi automatic pistols. This applies especially to a number of CCW revolvers develeped by Smith & Wesson, Ruger, Taurus, Ruger, or Colt.

And today we'll have a look at probably the 2 most popular CCW revolvers - Taurus Judge Public Defender and Smith & Wesson Governor. And we'll also decide which one is better. 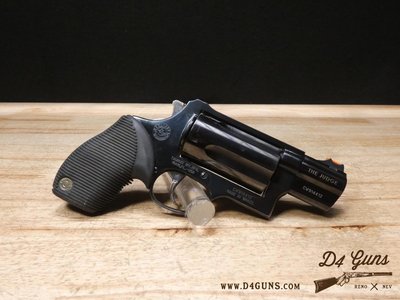 The first of the two revolvers we're gonna discuss today was introduced by Forjas Taurus back in 2009. The 2.5'' barrel model ranks among the tiniest handguns ever produced by the famous Brazilean manufacturer. The pistol belongs to the Taurus Judge family of pistols, which are extremely popular handguns for both self and home-defense (smaller models) as well as for hunting (bigger models such as Taurus Raging Bull).

This five-shooter boasts many great features and its tiny dimensions make it one of the hottest candidates for anyone who's looking for a new carry revolver (especially if you get a well made holster for it).

The second revolver we're gonna put into the equation was introduced back in 2011 by none other than Smith & Wesson, the world's most popular revolver manufacturer. At first glance, the Governor looks almost identical to the Judge ... and you'll soon notice these two guns share many other similarities.

This six-shot revolver by Smith and Wesson definitely belongs among the most popular revolvers developed by the American firearms behemoth and it finds itself on almost every single list of the best carry guns. And if you pair it up with a custom made Governor holster, you might never want to swap it for another gun.

Size and weight of Taurus Judge and S&W Governor

The first important thing to consider when selecting a new handgun for concealed carry is obviously size. The reason for this is obvious - the smaller a particular pistol is, the easier it is to carry it concealed.

While both revolvers come with approximately the same barrel length (2.5'' in case of the Judge and 2.75'' in that of the Governor), the S&W is almost an inch longer and higher. The bigger size also results in the Governong being a bit heavier, by some 2 ounces.

It;s also noteworthy that the Taurus Judge is built on the J-frame, which results in the gun being slightly thinner than the N-frame Governor.

Based on the dimensions, it seems like the Judge is more ideal in terms of concealment, although concealing the Governor is also a piece of cake.

The Judge comes with a 5-shot cylinder and the Governor can be fed up with 6 rounds of ammo. And while a 1 round difference doesn't seem like a total game changer, there might be situation in which the extra bullet can draw the line between staying alive and ... well, not staying alive.

Looking at the caliber, both revolvers can be fed with either the .45 Colt caliber or with the popular .410 bore shells. However, the SW Governor also enables for the use of .45 Auto cartridges.

When it comes to firing mechanism, these two revolvers are identical, both coming with a double-action trigger and are operated with a standard hammer.

If we were judging (pun intended) these two revolvers solely on their capacity and calibers available, the S&W Governor would come across as the better option for self-defense.

As we're talking about relatively modern revolvers, it can be expected that they come with gadgets improving their accuracy. The Taurus revolver features a fiber optic front and fixed rear sight. The revolver is considered quite fast on target and also very accurate. However, if fed with the .410 shot shells, you can't expect much accuracy at longer distances. After all, it's a home-defense revolver and a tool to stop carjackers. But if you decide to use it for close quarters action, it'll serve you just fine.

The Governor also comes with aiming aids, featuring a tritium front and fixed rear sight. But just like the Judge, it's also mainly meant as a self or home-defense handgun, which is why you can't expect hitting bullseye at more than 10 yards.

Construction-wise, both revolvers are extremely durable. Most Taurus Public Defender revolvers come with a frame made of blued finish steel and the frame of the S&W Governor is almost always made of matte black scandium allow. This means they not only withstand a lot of beating, but they also look very slick.

I'd also say that both handguns offer great ergonomics, although there's one significant difference. If you've got smaller hands, I'd say the Taurus will fit you a tad better. If, on the other hand, your palms are a bit bigger, the Governor comes with a larger grip area and is certainly the better option.

Now looking at these categories, I'd say there's no clear winner. Both pistols are highly accurate when it comes to their main intended use and their construction is reflected in their longevity. The only real difference between them is how well they fit in your hands, but that's a matter of personal preference and predispositions.

Having discussed the categories above, it looks like both revolvers are equally adequate for everyday concealed carry or home-defense and that there's no clear winner. Let's see if a brief comparison of the main specs breaks the tie.

Now these two revolvers might be almost identical in their construction and operation, but if you have a look at the last compared category, I'm sure you're gonna figure out what sets them apart - their price.

So, in case you're looking for a reliable, but also fairly affordable self and home-defense revolver, then I'd say the Taurus Judge is a better option. But if your budget isn't restricted, then I'd go for the Governor. Smith & Wesson is after all the most highly regarded revolver producer in the world ... plus there's always that extra bullet in the chamber.

How to conceal carry Taurus Judge and S&W Governor?

No matter which of these two revolvers you end up getting, you'll need a well made holster for it. Why? Because if your holster doesn't fit the dimensions of either of these pistols, you'll never be able to get the max out of their concealed carry potential. And that's exactly why you should consider getting a custom made Taurus Judge or S&W Governor holster.

If you decide to get the Taurus, then Public Defender IWB holsters are the best way how to carry the pistol concealed. However, if you prefer to carry in other than dominant side position, then any of these Taurus Judge appendix holsters will be a great choice. And if you're looking for a couple of proven tips, don't forget to check out our latest list of the best Taurus Judge Public Defender holsters, available here.

In case you like the S&W Governor more, then I certainly suggest checking out these Governor IWB or S&W Governor appendix holsters.

Conclusion - Which revolver is better for concealed carry?

Now this is a tough nut to crack. Both revolvers are an excellent concealed carry choice, especially if you pair them up with a custom S&W Governor holsters or a Taurus Judge holster. Their size is almost identical (although the Taurus takes a slight edge as it is a tad smaller), they utilize the same calibers, and they are equally accurate. Both of these handguns are also excellent at fulfilling their primary role - self and home-defense.

So, in the end, it really falls down to personal preference and I'd recommend giving both of them a shot before ruling the final verdict. If your hands are a bit bigger, I'd suggest going for the Governor by Smith and Wesson. On the other hand, if your budget is quite restricted, then you should consider getting the Taurus Public Defender.

7 Important Things To Consider When Carrying A Gun