The Story of Para Ordnance Holsters 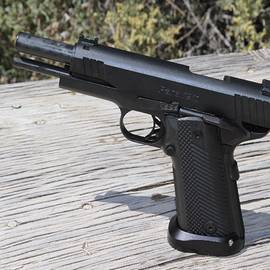 Para USA (Para) is a firearms manufacturer from the United States. It is a successor to Para-Ordnance, founded in Canada in 1985. It’s specialization is the manufacture of M1911-style semi-automatic pistols. The company's first product was a plastic paintball gun designed for police and military training purposes. In 2009 Para moved from Canada to the United States and became a totally U.S. Company - Para USA. In 2012 they became a part of the Freedom Group, a group owned by Cerberus Capital Management.

Para has products to satisfy the markets of law enforcement, military and civilians. Para USa is the first manufacturer to produce a double-action-only 1911-style pistol. Their pistols have a lot of uses, including competition, concealed carry, law enforcement and general purpose shooting. In 2009, Para-Ordnance announced a tactical rifle, the so called TTR “Tactical Target Rifle”, with an over-the-barrel delayed gas blowback system,that  lessens recoil compared with a traditional gas system. The Rifle  also relocated the recoil spring assembly moving it over the barrel and under the handguard.Production ended when Para USA exited the rifle market in 2011.