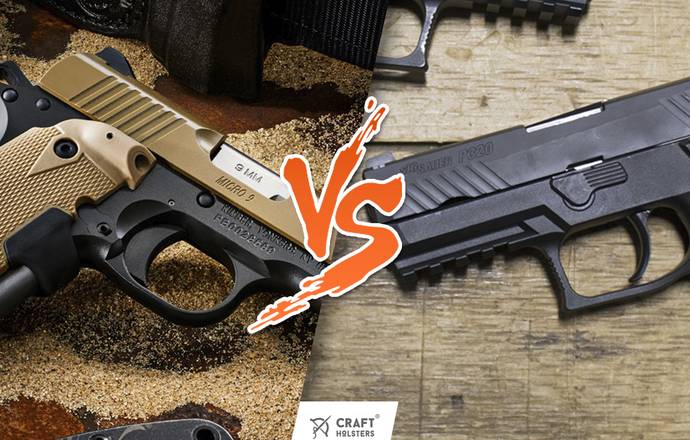 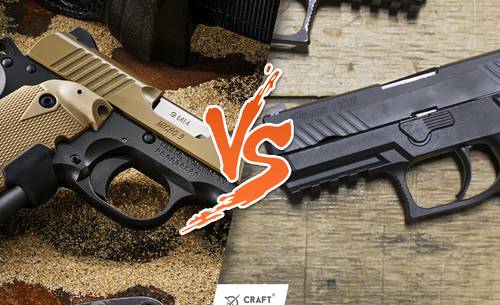 Kimber Micro 9 is a single-action, recoil-operated semi automatic pistol. The Micro 9 was developed by Kimber Manufacturing and introduced in 2016. Since then it has become one of the most popular Kimber handguns. Due to its compact size, the Kimber Micro 9 is also considered one of the best choices for everyday concealed carry. This tiny wonder by Kimber is based on the design of the most popular pistol ever produced - the M1911. The Kimber Micro 9 relies on the use of the 9mm cartridge (Luger or Parabellum), one of the most popular and budget-friendly service and self-defense pistol calibers, but it can also be chambered for the .380 ACP. The overall capacity of 6+1 rounds might not satisfy those who prefer competition and range shooting, but it’s more than enough for everyday carry purposes, which this pistol was originally designed for. For more detailed info check out this Kimber Micro 9 review.

But Kimber is not the only player in the CCW game, there is another lovely pistol - the Sig Sauer P320 Compact. Let’s take a deeper look at the main differences and similarities between these two CCW pistols and decide on your own which one is better for your everyday concealed carry. 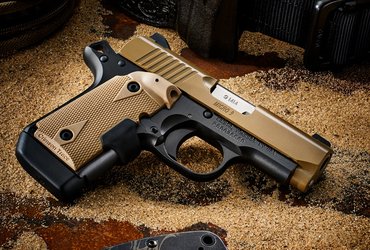 The Kimber Micro 9 definitely comes with dimensions that are ideal for concealed carry, especially when held in a well-fitting Kimber Micro 9 holster this pistol represents great choice for your new everyday concealed carry. Overall the pistol is 6.1” long, 4.07” high and 1.06” wide and it comes with a 3.15'' long barrel. Considering the Micro 9 only weighs 15.6-oz, it really belongs to the most compact and lightweight carry guns currently available on the market. The overall magazine capacity of 6+1 rounds may not be ideal for a range shooting, but it is definitely enough for everyday self-defense purposes. 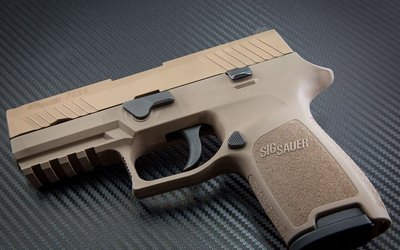 The Sig Sauer P320 Compact is a recoil operated semi-automatic pistol with a striker single-action trigger. This polymer-framed service pistol was designed with the input of law enforcement officers. The result is an operator-safety focused striker duty pistol that does not require the operator to pull the trigger nor use a special tool to take-down the firearm for cleaning or routine maintenance.

Overall the pistol is 7.2” long, 5.3” high and 1.4” wide and it comes with a 3.9'' long barrel. The Sig Sauer P320 Compact relies on the use of the 9 mm cartridge (Luger or Parabellum) and can hold up to 15 rounds within its double stack magazine. It also features a modular grip frame and removable fire control assembly, interchangeable grip panels, lower Picatinny rail and front and rear slide serrations. While it's certainly harder to conceal than the Micro 9, a well-built SIG P320 Compact holster will sure improve your overall carry experience.

Both the Micro 9 and the Sig P320 Compact assume the main features needed for EDC. But they are not the same handguns and there are some differences making one of them a better choice for your everyday concealed carry. Let’s take a deeper look at the main differences and similarities between these two pistols and decide. And I'm sure that the outcome of a mumber of rounds this stand-off consists of will help you decide which pistol is your best compact carry choice.

Well, the size really matters, especially when talking about the concealment. In this case, the smaller the gun is, the more compact it is, the better result you get when concealed carrying it. The Kimber Micro is 6.1” long, 4.07” high and 1.06” wide and it comes with a 3.15'' long barrel. Its dimensions are absolutely making it very easy to hide and ideal for EDC. But, the one thing that can be missed within this gun is a bigger mag capacity. Although 6+1 rounds could be enough for everyday self-defense, it is a bit of a lack for competition or range shooting and that can be a no go for some folks.

The Sig Sauer P320 Compact is 7.2” long, 5.3” high and 1.4” wide and it comes with a 3.9'' long barrel. So in general when compared with Micro 9, it is bigger in all the dimensions. This could be a little disadvantage of this pistol, as it is not that much easy to hide and wear as EDC like the Micro 9 is. So with regards to the size, the Kimber Micro 9 is a little bit more compact and more suitable for concealed carry though.

When talking about the weight, the Micro 9 is very lightweight with only 15.6-oz, which is a great feature especially when you want to carry it everyday. Compared to it, the Sig Sauer P320 Compact is much heavier. So obviously, the Micro 9 is more ideal as an EDC gun than the Sig P320 Compact.

So, it's quite clear who the first round is dominated by … the Micro 9.

The Kimber Micro 9 with ist single stack magazine that can hold up to 6+1 rounds was obviously designed with a lower capacity than the Sig Sauer P320 Compact. The Sig comes with a double stack magazine that can contain more than twice as much, concretely 15 rounds of ammo. That’s why it brings more interesting experience in competition shooting or shooting at the range. Of course, the mag capacity of both these pistols can be even higher with the aftermarket mag extensions. The Kimber Micro 9 extended magazine can hold up to a maximum of 8 rounds, which is still not enough for a great range experience, but it is enough for an EDC gun.

In comparison with the Micro 9, the Sig P320 Compact comes with a twice that much bigger magazine capacity in general and can be also extended by adding aftermarket magazine extensions. The most extended magazine for Sig P320 Compact can store up to 32 rounds of ammo, which is really a big deal when talking about range shooting experience, but at the same time it's making this pistol bigger and less suitable to wear as an EDC gun.

The battle has been evened out as the second round goes to … the SIG.

round 3 - ACCURACY AND RANGE PERFORMANCE

The Kimber Micro 9 not just looks good, but it brings great shooting experience at the range as well. The pistol feels very comfortable to fire and the accuracy seems to be really good. The recoil is managed well due mainly to the secure grip and comfortable angle. When shooting, this pistol usually powers through every single round without any hesitation or misfeeds, even though sometimes the issue can occur when attempting to do a quick magazine change. Although the Kimber Micro 9 is not a target pistol, it is easy to get nice clusters of holes in a target placed at 7 yards and seems to be quite reliable.

The Sig Sauer P320 Compact is accurate enough to be used in a competition and will easily outshoot most shooters. The Sig’s longer barrel allows for more of the powder inside the cartridge to burn while still in the rifling of the barrel resulting in slightly higher muzzle velocities. However, there are a few things to note about the accuracy of this gun. The trigger blade is large and deeply curved. Until you get used to it the trigger can be a serious hindrance to accuracy. Although the Sig P320 Compact feels good in the hand, you can experience an issue with the magazine dropping free for a reload.

Thus, a slight advantage in this battle goes to … the SIG.

round 4 - CALIBER AND FIRING MECHANISM

The Kimber Micro 9 is chambered for the 9x19mm Parabellum, the cartridge originally developed for Navy and Army purposes that quickly became the most popular cartridge across the whole world. As the Sig Sauer P320 Compact relies on the use of the same 9mm Luger ammo, there is nothing much to compare.

The moving and the motionless masses are coupled by a spring that absorbs the recoil energy as it is compressed by the movement and then expands providing energy for the rest of the operating cycle. Short recoil operation differs from long recoil operation in that the barrel and bolt recoil together only a short distance before they unlock and separate. The barrel stops quickly, and the bolt continues rearward, compressing the recoil spring and performing the automated extraction and feeding process. During the last portion of its forward travel, the bolt locks into the barrel and pushes the barrel back into battery.

The Sig Sauer is the absolute opposite, as it is striker-fired, featuring a single-action (SA) trigger, meaning that the trigger does not cock the gun, but only releases the striker when pulled. Cocking of the striker is performed by the retracting slide. The Sig P320 Compact has no manual safeties and the only operating element is the trigger. This kind of firing mechanism has a lower firepower than for example hammer-fired pistols. Although it doesn’t require the gun to be composed from that many parts and that results in a lower risk of any hardware malfunctions.

Based on the caliber and firepower, the last battle ends in … a TIE.

So, our compact stand-off is almost over. So far, it seems like the SIG takes the edge. But before we rule the final verdict, let's have a look at a quick side-by-side comparison of the main specs of either of these pistols.

There is no doubt that the Kimber Micro 9 is much more suitable for everyday concealed carry because of its overall dimensions. It is easier to hide, easier to wear than the more heavy and larger Sig Sauer P320 Compact. The important thing when considering to wear either the more compact Micro 9 or the bigger Sig P320 as everyday carry guns is to pair them with a well-fitting holster. There is a big offer of Kimber Micro 9 holsters as well as Sig Sauer P320 Compact holsters, offering something for all the popular carry styles. So, be sure that you'll be able to find what you're looking for.

CONCLUSION - WHO WINS THIS BATTLE?

Mainly because of its slightly better accuracy and higher magazine capacity, the winner of this ultimate battle is the Sig Sauer P320 Compact. However, when talking about the concealment and a better gun for your EDC, it would definitely be the Kimber Micro 9.

And you can always upgrade your Kimber by adding the right aftermarket accessories, such as lights and lasers providing you better accuracy. If you wish to know more about your other upgrade options, feel free to check the Kimber Micro 9 review.