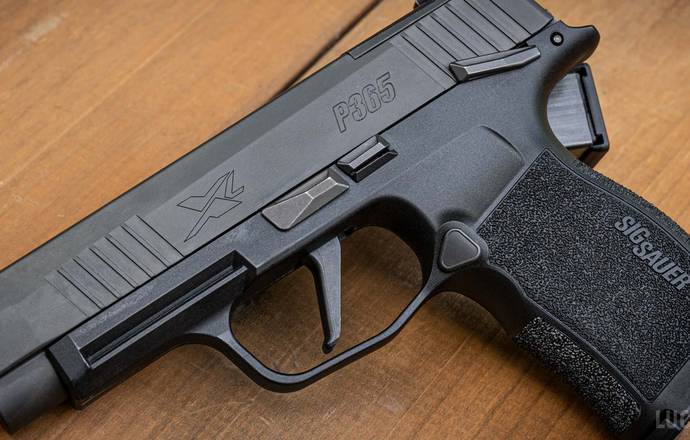 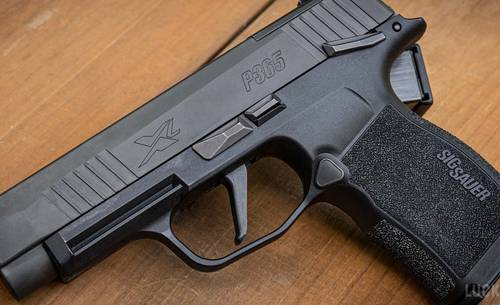 The SIG Sauer P365 XL is a striker-fired, semi-automatic, s pistol that was introduced back in 2019. The pistol was released a year after SIG Sauer’s  introduction of the standard P365 model, a micro-compact carry gun that would later receive the title “Handgun of the year” of 2018 by many gun-related magazines. Just like the standard model, the XL pistol has quickly become very popular among the general public and it’s currently considered one of the best compact-sized concealed carry pistols.

The P365 XL model pistol belongs to the P365 family of SIG Sauer handguns, basically being a slightly bigger version of the standard P365. In this review, we will have a quick look at the most important aspects of this SIG pistol, such as its size, main specs, accuracy, reliability and some more. And if you want to compare the XL model to the standard one, feel free to have a look at our SIG Sauer P365 review as well.

Let’s start with having a quick look at the basic specs of the SIG Sauer P365 XL. And let’s compare these to the basic stats of the standard model, so that you can see how different (or alike) the two models are.The XL model utilizes the same fire control unit (FCU) as the P365, but it’s got a larger grip module that accepts 12-round flush magazines, a flat trigger, and a longer slide and barrel. Also, one huge difference is that the rear sight on the P365 XL slide is removable (which is not the case with the standard P365), which allows for optic devices (red dot and reflex sights) to be attached.

When it comes to its size, the P365 XL belongs among sub compact handguns. The pistol’s barrel is 3.7’’ long and the overall length is 6.6’’. This makes the XL model nearly an inch longer than the standard P365, which is quite a big difference, but the pistol is still nearly an ideal option for everyday concealed carry. The pistol is 1.1’’ wide and its height is 4.8’’. Compared to the standard P365, the XL model is not only bigger in all its dimensions, it’s also SIGnificantly heavier, weighing 20.7oz when unloaded. Most of the additional weight, obviously, comes from the longer slide.

Here you can see the 2 models side by side: 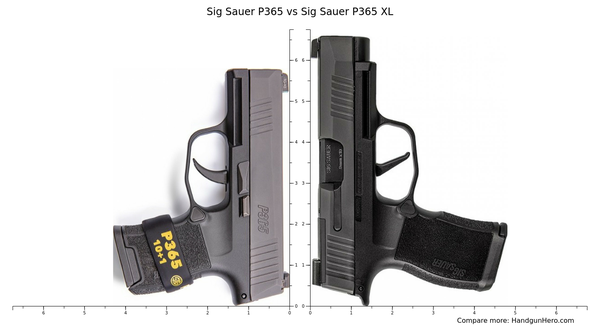 The SIG P365XL comes with a 12 round flush magazine, which is 2 rounds more than the standard model. While this is quite a lot of capacity for a compact-sized pistol, it might still not be enough for some of you. That’s the reason why SIG Sauer introduced a 15 round extended magazine. And even though this magazine is a bit more expensive (expect to pay something around $50), it’s compatible with all the P365 models.

The P365 XL is a bit longer and it allows for a much firmer grip when compared to the standard model. Now based on these differences, it’s only natural to presume that the recoil it creates would be a bit softer. And it really is the case. Many of those who have bought both the XL version of the P365 have reported SIGnificantly lower felt recoil with the XL model.

The low felt recoil makes the SIG P365 XL fun to shoot. What makes shooting the XL version a bit more enjoyable for me than the standard P365 is the pistol’s trigger. While that of the P365 is a bit curved, the P365 XL has a flat trigger. The flat trigger does result in a slightly longer pull length from the center, which could work better for people with larger hands. I actually believe SIG decided to implement such trigger changes mainly because quite many shooters of the standard P365 complained about short length of pull.

Just like the SIG P365, the XL version also comes equipped with the SIG Sauer XRay3 Night Sights. Simply put, it’s a 3-Dot Tritium System for superior glowing illumination in low-light. The front sight boasts high day and night visibility and it’s a green ring around a tritium vial. The rear sight consists of two tritium vials and it is serrated in order to reduce glare, which is an ideal solution for brighter environments. Unlike the standard model, the P365 XL’s rear sight is removable, allowing for various other optic devices such as red dot and reflex sights to be attached to the pistol’s slide.

The night sights system the SIG P365 comes with as well as many aftermarket attachments such as tactical lights, lasers, and red dot sights make the pistol perform very well in the field of target acquisition and accuracy.

When I first heard rumours about the planning release of the P365 XL, I wasn’t sure what to expect. As I had bought the standard P365 right after it’s introduction, I was one of the people who experienced some problems with the gun. It’s true SIG Sauer did everything they could to fix the SIG Sauer P365 problems ASAP, but I was simply afraid the same would happen with the XL version.

Luckily, I was wrong and it’s safe to say the SIG P365 XL is a very reliable, nearly flawless pistol. I know people who’ve put thousands of rounds through it, but I haven’t heard about any major complaints. That’s what made me decide to give the XL version a chance. I’m now a couple of hundreds of rounds in and I haven’t had a single problem with the gun.

What increases the pistol’s reliability is the ejection port, which is generously big enough. Another key feature is the pistol’s slide, which contains both front and rear cocking serrations for easy slide racking. Simply put, the SIG Sauer P365 XL is a very reliable pistol that will not let you down when you need it most.

Thanks to its compact size, the SIG P365 XL is very easy to hide inside a well-fitting holster, which makes it a very viable option for everyday concealed carry. The pistol’s dimensions are quite favorable for easy concealment, which means you won’t have any problem masking it no matter what carry style you decide to choose.

Just like the standard P365, the XL model works well with IWB and appendix holsters. As it is a bit bigger, shoulder holsters are also an option, which I wouldn’t really advise when it comes to the micro-compact version. The slim profile of the pistol makes it easy to conceal in an outside the waistband holster too. And as the SIG P365 XL is also a great service pistol, which means it’s a great match for a solid duty holster.

No matter which carry style you end up going with, just make sure your SIG Sauer P365 XL holster is a well-fitting one, made of high-quality materials.

I’d say the SIG Sauer P365 XL is definitely a gun to buy. I’d easily place it on the list of 5 best modern compact pistols. The pistol’s dimensions result in a super easy concealment, which makes it a great option for everyday concealed carry. The P365 XL comes with a high-cap 12 round magazine and if this is not enough for you, you can get a 15 round extension.

The XL also model comes with a very solid grip, which you’ll get used to very quickly. When it comes to performance, the pistol is almost impeccable and the aftermarket options to further enhance the pistol’s target acquisition and accuracy are nearly endless. The felt recoil is much lower than with the standard P365, which makes dynamic shooting with the XL a lot of fun. If you pair the pistol up with a well-fitting SIG Sauer P365 XL holster, you’ll definitely have one of the best carry guns.

3 Things No One Tells You About Concealed Carry