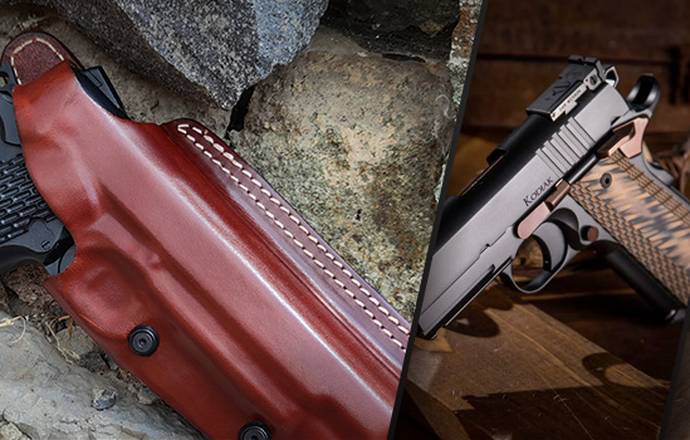 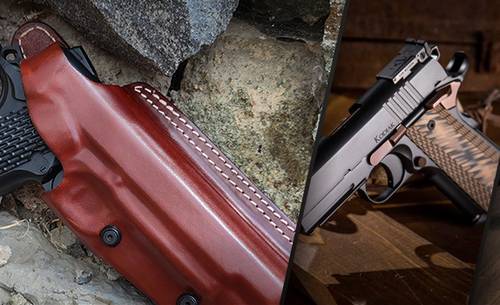 There’s no single firearm more popular than the M1911. A bold statement, right? But it’s true and if you’re an AR15 fan, you just have to deal with it :)

Designed by John Moses Browning back in 1911, the pistol was originally chambered for the .45 ACP (Automatic Colt Pistol) cartridge and it came with a 5 inches long barrel. That’s also the design which many modern 1911 manufacturers base their versions of the pistol on. As John Browning worked for Colt back then, America's most iconic handgun design is also commonly referred to as Colt Government (or Colt 1911).

Even though the original M1911 was a huge success (after all, the pistol won 2 World Wars), Colt wanted to expand their 1911 inventory by designing new 1911 models, featuring different barrel lengths and calibers. That’s also one of the reasons why back in 1949, Colt’s Manufacturing Company started working on a brand new Colt Commander model. Introduced in 1950, the Colt Commander was the first 1911-style pistol with a 4.25’’ long barrel and chambered for the 9x19mm Parabellum (or 9mm Luger) cartridge.

But today, I’m here to talk about M1911 pistols that rely on the use of heavily underrated 10mm Auto. And I’m here to show you what some of the best 10mm 1911 pistols are!

What is the 10mm Auto cartridge? 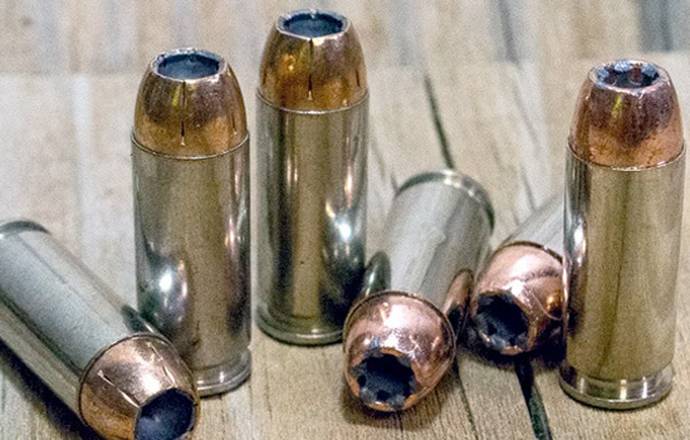 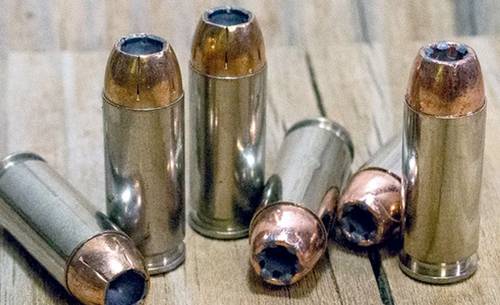 Ever heard about the Bren Ten by Dornaus & Dixon Enterprises Inc.? That’s the name of the first ever pistol chambered for the 10mm Auto (or 10x25mm) cartridge. The caliber itself was designed by Jeff Cooper, a former US Marine, who worked for a Swedish firearm ammunition manufacturer Norma Precision AB. He’d also become popular for his invention of the 4 Laws of Gun Safety.

Both the 10 mm Auto as well as Bren Ten were introduced back in 1983. While the pistol was discontinued back in 1986 (the company went bankrupt), the cartridge has lived on. In 1989, the caliber was adopted by the FBI, but as its recoil was excessive in terms of training (when it came to regular agents and police officers), it was decommissioned. The only FBI divisions that still use the 10mm Auto are the FBI Hostage Rescue Team and FBI Special Weapons and Tactics Team. Even though the 10mm Auto faded in popularity back in the 90s, it laid the foundation to a number of different calibers developed throughout the 90s, the most notable being the .40 S&W and .357 SIG.

In terms of dimensions, the 10mm Auto has 1.56 milliliter (24.1 grain H2O) cartridge case capacity. In terms of performance, the 10 mm Auto is a high-velocity cartridge with a less-curved flight path upon firing than most other calibers. When it comes to power, there’s no doubt the 10mm is stronger than the 9x19mm Parabellum, but many would argue if it’s more powerful than the .45 ACP. Either way, if you haven’t shot a 10mm pistol yet, you should definitely give it a try. Talking about 10mm pistols, let’s now take a look at why you clicked on this article in the first place - the best 10mm Auto 1911 pistols currently available.

Back in 1987, Colt introduced their Delta Elite, which was the first ever 1911 pistol relying on the use of the 10mm Auto. At the same time, the Colt Delta Elite was only the second 10mm handgun ever produced (the first was the Bren Ten). That’s also the reason why you’ll find it on our list of the best 10mm M1911 pistols, which starts right below. And sorry for the spoiler!

The first 10mm 1911 ever produced deserves to be mentioned first, right? While the original pistol didn’t enjoy much popularity, the new Colt Delta Elite model introduced in 2009 is a completely different story. True to the original design, with a forged stainless steel frame, slide, slide stop, and barrel, the pistol has quickly become a commercial success. Get yours and find out why. And don’t forget to get yourself a custom Colt Delta Elite holster. BTW, there’s also a Delta Elite rail version available. 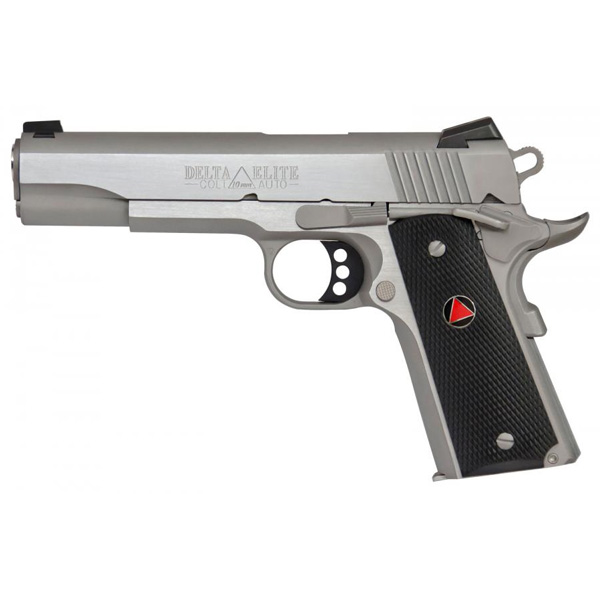 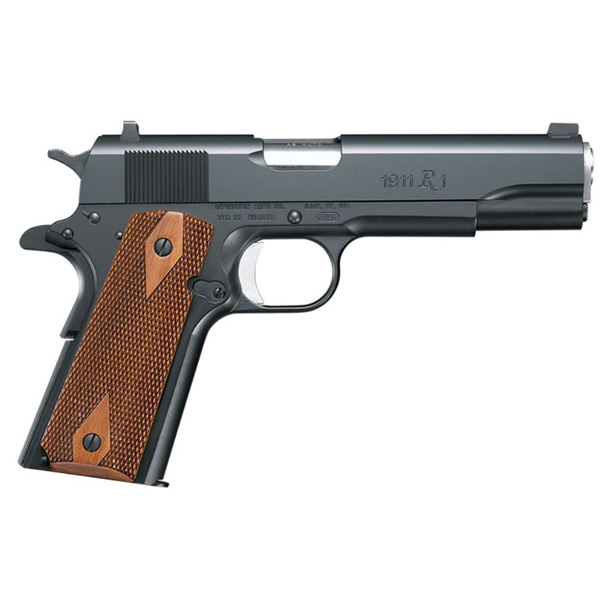 Remington’s R1 Hunter is a long slide M1911 pistol with a 6’’ long barrel. The combination of a longer slide and powerful cartridge result in what’s one of the best M1911 pistols for hunting (hence its name). The pistol offers match quality adjustable sights, premium VZ G10 grips, extended beavertail grip safety, and even an accessory rail. In combination with a custom Remington R1 holster, the pistol becomes one of your best choices for hunting, tactical use, and competition shooting. 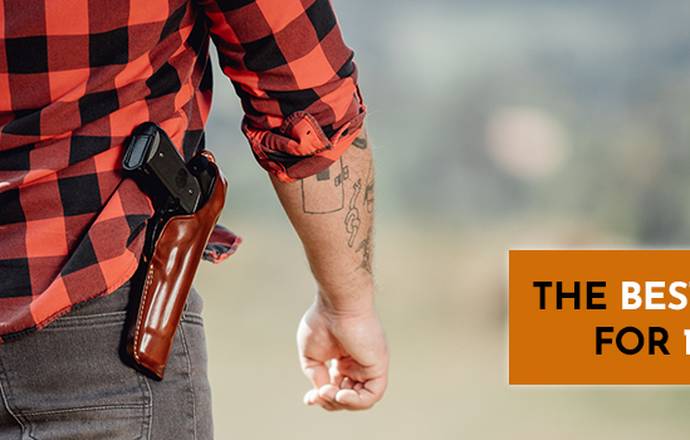 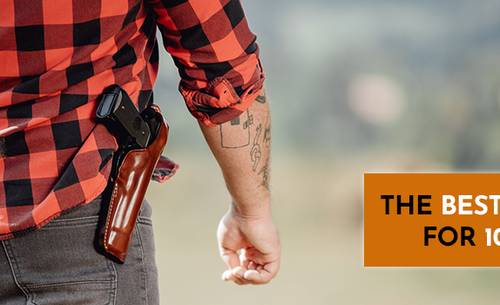 You came here to check out what some of the best M1911s chambered for the 10mm are, right? But hey, hold on for a while ... What if you left with a little more than just a tip on your new 1911 pistol?

The little more I'm talking about is a custom made 10mm M1911 holster, which you can find if you hit that button below. These holsters will fit any non-rail 10mm 1911 on our list.

While this model is no longer retailed by Springfield Armory, it’s definitely one of their finest M1911 pistols ever made. This version of the famous TRP features a 5 inches long barrel, accessory rail, and Tritium front and rear sights. The TRP Operator - 5’’ features beautiful VZ Alien G10 grips with octo-grip checkering. The checkering also makes the TRP one of the most ergonomic 10mm 1911 pistols on the list. When paired up with a custom Springfield TRP Operator holster, this pistol is a sight to behold. 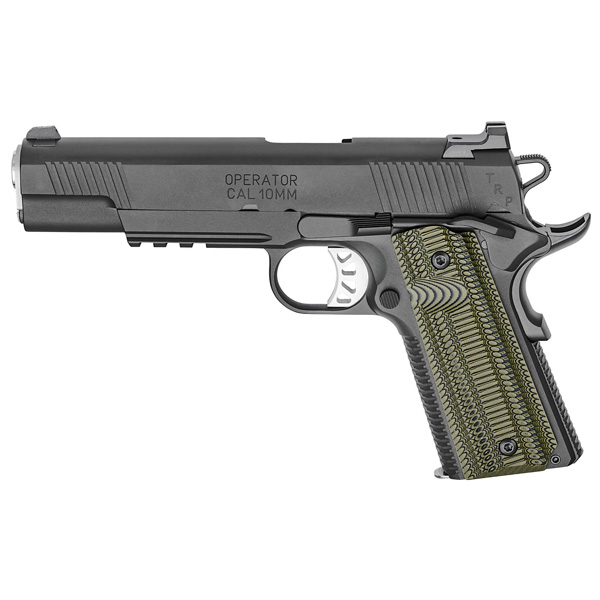 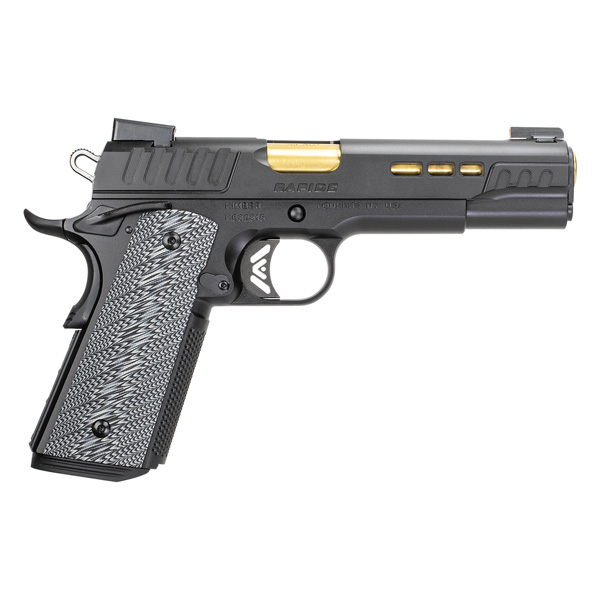 This 1911 features a slightly longer barrel (5.25’’) and it’s probably the most modern 10mm 1911 pistol in terms of looks. The pistol comes with stepped cocking serrations, slide lightening cuts for faster lock time and TiN coated barrel for extreme durability. Also, the pistol features beautiful G10 WavZ TM grips, which will give you extra confidence when shooting. The pistol also offers a day/night sights system. Combine it with a custom Kimber RAPIDE (DN/NS) holster, and you get an ultimate 10mm handgun.

While the company mainly specializes in production of wheel guns and striker-fired pistols, Ruger’s line of M1911 pistols is surprisingly decent. The Ruger SR1911 Target is their only 1911 chambered for the 10mm, but its place on this list is fully deserved. It’s one of the safest and most ergonomic M1911 pistols as it features an oversized beavertail grip safety, extended thumb safety, and slide stop lever. And the pistol becomes even better when matched with a custom Ruger SR1911 Target holster. 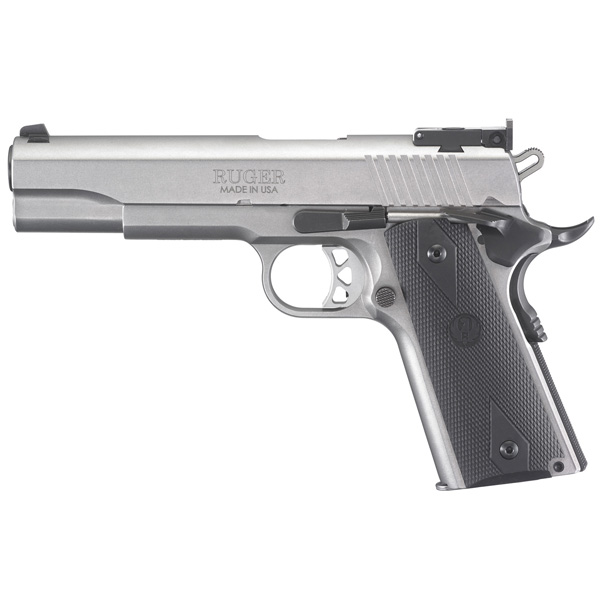 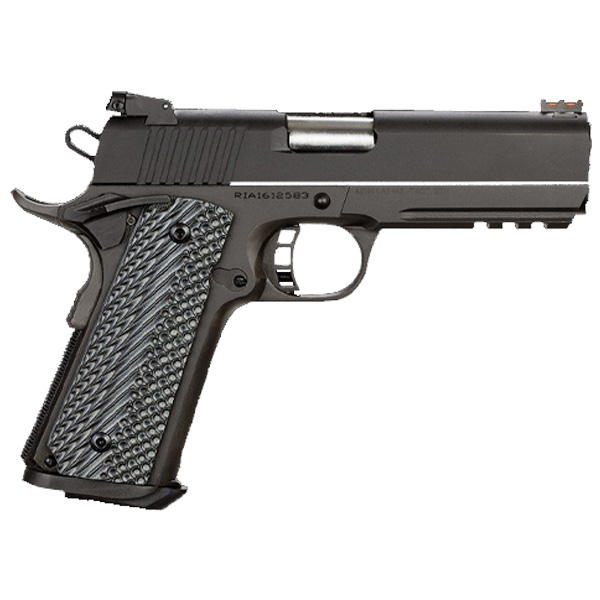 Armscor is well-known for its RIA 1911 series of handguns. Their Rock Island TAC Ultra MS is a Commander-size 10mm 1911 pistol (meaning its barrel is 4.25’’ long) and it’s equipped with an accessory rail, which means it’s more than suitable for tactical use. The pistol also sports fiber-optic front and adjustable rear sights. On top of that, it comes with neatly looking custom G10 grips, which in combination with a custom Rock Island Tac holster makes the pistol look even better.

This is my most favorite 10mm handgun. But the pistol has also got a lot to offer. Not only does Dan Wesson Kodiak look exceptionally beautiful, the combination of a long slide (6’’ barrel) and the 10mm Auto makes it one of the most powerful M1911 pistols ever made. Of course, this also makes it the most expensive 10mm 1911 on our list (at MSRP of $2,505), but the pistol is worth every penny. A pistol this beautiful (and pricey) simply deserves to be carried in a custom Dan Wesson Kodiak holster. 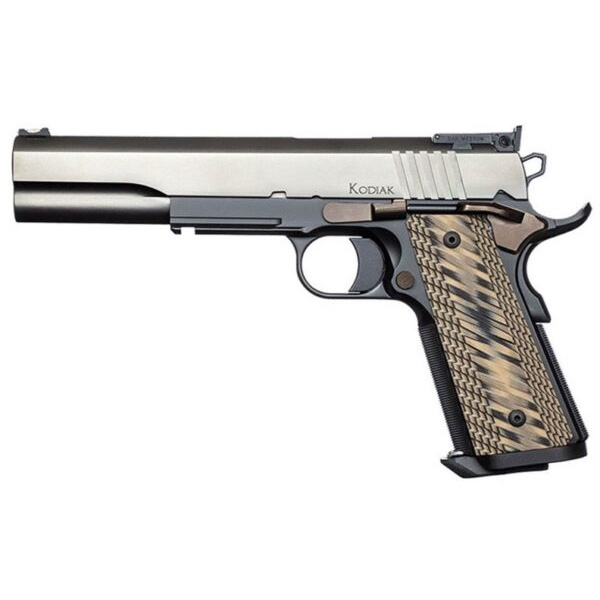 While coming up with this list wasn’t that difficult, deciding which of these 10mm 1911 pistols is the best one sure is a toughie. I’d say it all falls down to your preference as well as situations you need the pistol for.

If you’re looking for the best 10mm 1911 for concealed carry, then you surely can’t go wrong with the Rock Island TAC Ultra MS. On the other hand, if you’re a fan of the standard Colt Government, but you like going tactical, then I’d give the Colt Delta Elite a try. Based on the proven M1911 design and equipped with a tactical rail, this is one of the best 1911s chambered for the 10mm.

And if you think you can handle the recoil, they give Dan Wesson’s Kodiak a try. Not only is the pistol a sight to behold, but the combination of the powerful 10mm and Kodiak’s long slide means it’s one of the best 1911s for hunting, range, and competitions.

No matter which of these 10mm 1911s you end up getting, I’m pretty sure you’ll like this alternative to the .45ACP and 9mm. Just don’t forget to do one more thing once you’ve gotten your new pistol - get yourself a custom 10mm M1911 leather holster!