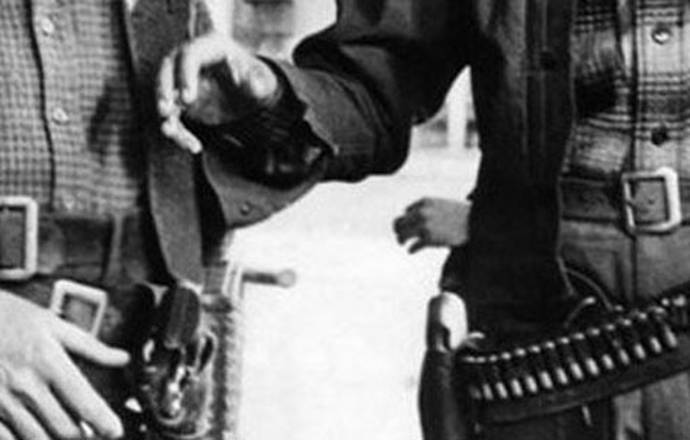 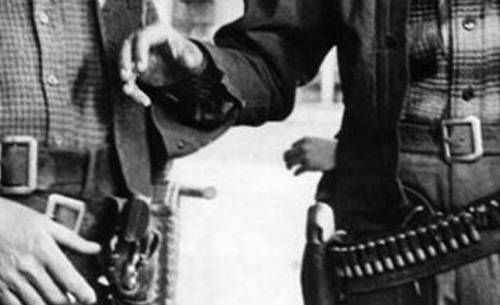 Cross draw holsters aren’t new to the shooting world. They have been here since the age of cowboys and their need to get their guns away from their way while at work or more importantly, while riding a horse. Nowadays cross draw holsters serve a less Clint Eastwood-y purpose but still have their respected place in the hall of fame of holsters. They have taken some criticism in the past years because the shooting world tends more to strong side draw or IWB draw, but years of use and a lot of cross draw lovers prove that the critics can just go and draw their dominant hand holsters elsewhere.

Todays cross draw carry puts your handgun in the front of your non-dominant hip at waist level while the muzzle points toward the outside of the body and the grip faces the dominant hand. For clock lovers, 10 or 11 o’clock. You draw across your body - hence the cross draw - with your dominant hand. The key here is a lot of practice because you need to eliminate any chance of pointing the gun at you or anything else you don’t want to destroy. The key of course is to have a custom made cross draw holster, break it in and then practice practice practice.

The Pros And Cons Of Cross Draw Holsters

Cross draw hoslters have many pros and cons and the same number of followers and haters. Some people love putting their cross draw hoslters for 1911 or S&W 686 on their belts. But let's Put the differences aside, cross draw is a carry style that compensates for the lack of advantages some other OWB holsters have and at the same time doesn't have all the advantages of OWB holsters. Let's take a look at the pros and cons.

The Pros Of Cross Draw Carry

Cross Draw In The Car

One of the biggest benefits of cross draw is for gun enthusiasts that spend most of the day on a chair or in a seat. The position of the holster on your body is natural while sitting and it won’t obstruct you in any way. The design of vehicles may be a challenge for you to draw easily and safely. Trying to draw from an appendix IWB or strong side OWB may be difficult while sitting in your truck and having your seatbelt on. On the other hand, cross draw comes in handy as the natural movement of your hand across your body while sitting will come to the grip of your gun and you can then just draw easily and engage the threat.

Another big benefit of cross draw is the concealability. Sometimes you can’t easily conceal your strong side OWB under your jacket, there’s gun print and also bending over may reveal that you are armed. Cross draw on the other hand places the handgun in a position that is not so often uncovered - that is, if you are not a belly dancer, because then we recommend belly bands of course. Concealability of a cross draw holster may come in handy also in a difficult situation, where you are in the presence of a threat and need to access your firearm in a secret way. You can just pretend to fold your arms and draw, or just draw and move the weapon under your jacket ready to engage. But let’s steer away from worst case scenarios.

If you had a shoulder injury, particularly a rotator cuff involving injury, you can find drawing from your strong side difficult. That’s where cross draw holsters come in handy. . Some people with bad backs or hip conditions require weight to be removed from the pelvic area where possible. After some abdominal or hip surgeries, doctors recommend the patient not even wear a belt during the recovery period. There are also orthopedic or medical reasons one might choose to carry in cross draw. Some injuries to the strong side hip area can make it agonizing to wear a firearm there, but the weight can be born on the opposite hip. Some people find it easier to learn cross draw with their dominant hand than learning conventional hip draw with their “weak” hand.

The Cons Of Cross Draw Carry

The disadvantage of cross draw is a higher chance of disarming somebody from the front. This can be argued as if someone is going to disarm you you will more likely have a chance of neutralizing that attempt while facing the  target, contrary to the chance of disarming you from behind. Be it while standing or sitting. Plus another advantage of cross draw while driving is that if anyone wanted to attack you from behind he or she can’t reach your firearm if it’s in the front, contrary to a standard OWB holster on your dominant hip.

Another disadvantage is the area covered by the muzzle while the handgun is drawn. The muzzle covers a wide arch from the non-dominant side until it is brought to index the target during cross draw. This is a fairly undisputable disadvantage, the same as small of back holsters have, but can be overcome by rigorous training and situational awareness.

Last but not least - the con of cross draw is that some shooting ranges don’t allow a weapon to be holstered in a cross draw holster. The reason is that when facing the target at the range, the muzzle of the loaded firearm points backwards, at other shooters or even the safety officer.

The Pros And Cons Of Cross Draw Holsters

OWB is the most used version of the cross draw world. There are loads and loads of various designs of cross draw holsters that differ in the cant, the thumb break, the material, accessibility etc. You have to keep in mind the circumstances you’ll be using the holster in while choosing you cross draw holster. If you are going to sit a lot while armed go for a more canted version which has a thumb release. If not you can easily pick a holster with a index finger release.

IWB cross draw holsters are also practical if you are looking for deep concealment where the handle does not stick out and you are not required to use a coat flip while drawing. IWB for cross draws are not the most common ones but this style of carry has a lot of followers. Cross draw appendix carry is not to be discussed here for the sake of your femoral artery.

How to draw from a cross draw holster can be broken into steps. The key here is to repeat it as much as you can so you get used to it with a empty and checked gun - but since you all are responsible shooters this is just a friendly reminder. Let’s get to the draw.