Even though the CCW laws have never been stricter than these days, carrying outside the waistband (abbreviated to OWB) is still one of the most popular ways to carry a handgun. OWB carry means you attach your holster from the outside of your pants. This means that outside the waistband holsters are an ideal way to carry in the states that allow for open carry, but also that they aren’t as frequently used in the regions where you can only use a concealed carry holster.

Even though they can’t be used everywhere, OWB holsters come with a number of advantages. The major benefit of holsters carried OWB style is super high carry comfort. At the same time, carrying like this results in a super easy access, quick draw, and intuitive reholstering. OWB holsters are the best way to carry full-sized handguns such as the 1911, FN Five-seveN, or SIG P226. Also, these holsters are preferred among hunters whose sidearm (or perhaps the primary gun) is something as huge as the Taurus Raging Hunter.

On the other hand, there’s a couple of problems OWB holsters come with. First and foremost, outside the waistband holsters are a bit more difficult to conceal than let’s say IWB holsters. This, however, isn’t a rule as in colder months, putting on a jacket or coat makes concealment of OWB holsters quite easy. OWB holsters most often come with belt slots, which means their attachment might be a bit awkward as you always need to take your belt off in order to mount the holster. When you decide to go for an open carry holster, you also have to expect that others can quickly realize you’re carrying. This is also the main reason why OWB holsters are mainly popular among Law Enforcement officers, who you’d expect to carry anyway. The list of (dis)advantages of this carry style doesn’t end here, though, and here’s where you can learn more about the pros and cons of OWB holsters.

An OWB holster is often referred to as a belt holster or dominant-side holster. However, these synonyms aren’t absolute as OWB holsters can be carried in a number of different ways. While they truly are most frequently carried on one’s dominant side (usually in the 3 or 4 o’clock position), cross-draw OWB carry is also quite popular. If you carry your OWB holster cross-draw style, you have to reach for your firearm across your body. This might result in a slightly slower draw speed, but it’s quite convenient for anyone suffering from shoulder pain.

OWB holsters carried on one’s dominant side (often called strong side holsters) can be further divided into several categories. The most popular group are pancake OWB holsters, which offer slim profile and great balance on the belt. OWB pancake holsters often come with the popular FBI cant (slightly forward-leaning). Also, pancake holsters often come with an open-top design, the main advantage of which is super quick draw. Another immensely popular group are thumb-break OWB holsters. Such a holster comes with a strap attached to its top, which is meant to increase the holster’s retention as well as prevent your gun from being snatched away. This is the main reason why OWB holsters with safety straps are popular among armed professionals. Talking about professionals, another popular group of outside the waistband holsters are so-called OWB duty holsters, which always come with a thumb-break.

As there are many different types of OWB holsters, it might be difficult to select the right holsters. If you can’t decide which one to get, check out our list of the best OWB holsters. Also, keep in mind that if you carry a tactical light or laser attached to your gun, you’ll need a light-bearing OWB holster. The same goes for optics devices such as red dot, reflex, and RMR sights. If you have such an attachment on your pistol’s slight, you should definitely take a look at these red dot OWB holsters.
There’s another way to divide outside the waistband holsters, and that’s based on material they’re made of. When it comes to on-duty professionals, these tend to go for kydex OWB holsters as well as OWB nylon holsters. However, when it comes to civilians, leather OWB holsters seem to be the most popular option. 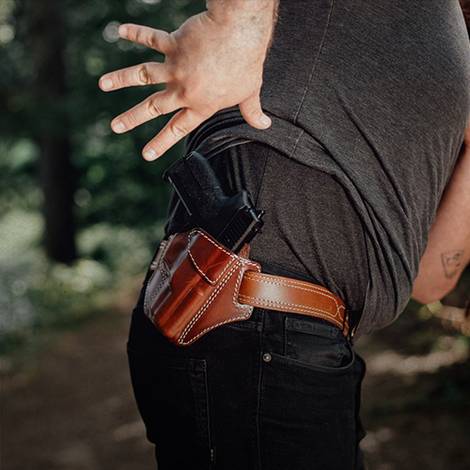 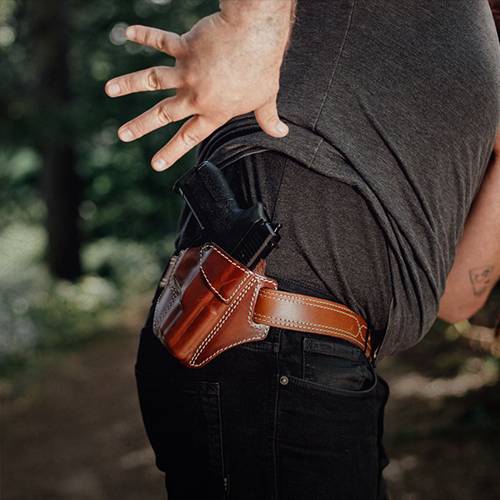